Back to Work and to Barnhill

I've started back into writing slowly after my long break. I'm not currently doing a poem-a-day prompt, but working everyday on older poems. I'm editing those started on my last two month-long courses, focussing the language and intent. A few are ready to submit to journals, along with the pile of rejections that came in while I was away. I've noticed most American magazines seem to be on hiatus, but the British ones are still working on backlogs.

I'm also going through some of my old journals for details of poems I've had on the back burner because I couldn't remember what actually happened. It's lovely how they have jogged my memory and taken me back to those places and times. Little details I have forgotten or placed onto different scenes brought into firm focus. Unfortunately, I didn't write about everything. Moments that seem important now often didn't get mentioned in my journals at all, either because they didn't seem of consequence at the time or life just got in the way of writing. I've never been one for writing every day which would help to rebuild moments later.

I'm starting new poems on specific subjects that I decided I wanted to write about when I was travelling. I will start a new poetry course in August, so this seems to be a good way to get back into that more intensive work.

I finished reading Norman Bissell's Barnhill and it was a surprise as I bought it mostly on the connection with the place, rather than anything to do with George Orwell. I thought it would be more of a biography, but it's a biographical novel based on George Orwell's later years, especially those in connection with Jura and Barnhill and the writing of 1984. Less dry quoting of dates and details and more trying to capture the writer and his obsessions with writing, Jura and creating a strong family for his son.

I knew very little of Orwell's life, so learning about his connection with the Spanish Civil War, his marital and other relations and his illness were all very intruiging. Bissell also included the point of view of Orwell's second wife Sonia Brownell whose voice unexpectantly pops up and gives the reader new insight. The book also illustrates how Orwell might have drawn details from his own experiences when writing 1984.

While Barnhill tries to stick strongly to the facts of Orwell's life and there is a list at the end of known details which contribute to the story, it's the scenes where Bissell allows himself to imagine Orwell that the man really comes alive for me, spending Hogmanay in Glasgow, his worries about finishing his book when he knows he's dying and the connections he had with his friends.

Though Bissell is a poet and director of the Scottish Centre for Geopoetics he doesn't get caught up in the romanticism of Jura and life alone there which must be difficult to do as I was overawed by the place when I visited. The attention to Orwell's physical life there, taking care of the garden and fixing machinery sometimes taken from entries in Orwell's journal feels very focussed and fits in with the George Orwell drawn in the novel. I could very well remember my journey down the 'Long Road' to get to Barnhill from Ardlussa as I read Bissell's description of cars and motorbikes breaking down while trying to get along it.

I could occasionally feel a modern voice of hindsight coming in which felt as if it wanted to make sure the reader could see how spot on George Orwell was in his predictions of Big Brother and his fears of government control. When they came from George's mouth they worked, felt in character, but sometimes the narrative pushed too much. But I have to admit with the way current media and politics is going, I would have found it hard to resist pointing out the connections as well. I recently reread 1984 and was gobsmacked about how much closer we were creeping towards Orwell's nightmare vision than when I first read it in 1984 in high school in America .

Overall, I enjoyed the book, it was informative, but it created a rounded and interesting view of Orwell's character and the time he was living in. The novel manages to illustrate the complexities of a difficult man who allowed little of his personal life to be seen by adding a greater depth to his novel masterpiece.
Posted by Äiti at 09:10 No comments:

I've just spent two weeks on holiday in Scotland, out of routine, barely writing. The first week I was away from my family, relaxing. I wrote in my journal about my trip and took notes of images and lines that popped into my head about what I was experiencing, but I didn't work on any poems. A lot of rejections came in, unsubmitted poems piled up. It felt weird and strangely liberating. I missed my daily routine, but enjoyed soaking up the new experiences which I will hopefully work into poems in the future.

While on the island of Jura, I took a long walk to Barnhill, George Orwell's house, where he wrote 1984. We got lucky to manage the 12 miles between the rain showers and had a beautiful view to eat our lunch just below Barnhill. Twelve miles was too much for me, I was pretty tired and sore by the end, but earned my shower and wine reward at the hotel. My friend walked all three Paps of Jura the next day, so I feel like a total weakling. 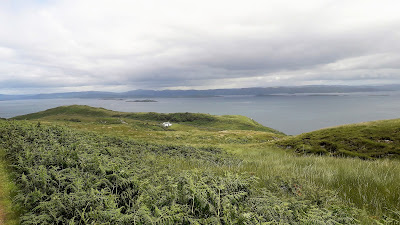 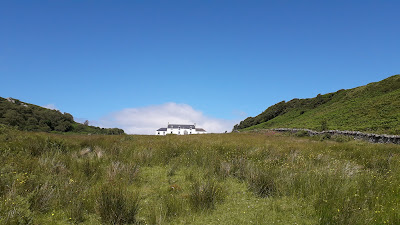 I've ordered a copy of Barnhill by Norman Bissell to read when I get back home. It's about Orwell's time on Jura, writing the novel 1984. I had hoped it would arrive before I left for Jura, so I could read it while I was there, but it will be a nice chance to relive the place. I'm looking forward to it.

I also took a boat tour to the Corryvreckan where Orwell almost drowned saving his young son's life. One of my friend's son was planning on taking part of a yearly race across the Corryvreckan whirlpool gulf. Not for the faint of heart, but I'm told it's well-supervised. I learned it's not just one constant whirlpool but an area where the tides from the loch rush out over a sea bottom that goes from super deep to shallow in a short space, so the water becomes very rough and changes constantly, causing standing waves and whirlpools. Here's a small whirlpool on a calm day. 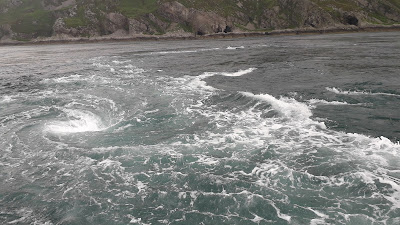 One of my holiday's highlights was rescuing my childhood/ youth's diaries from the attic along with a pile of old writing journals and favourite books. The books and journals are being posted, but I carried the diaries in my carry-on back to Finland. I really feel like I've been missing a limb with them being gone. Hopefully I have all of them, but with 36 years worth it'll take a while to sort through them and check. Hopefully there will be lots of material there for me to reconsider.

Both Angela Carr and Wendy Pratt are running online courses in August. I can highly recommend both and have joined one to help me turn my experiences and old writing into new poems.

I'm back to the grind this morning. Need to get into writing again as well as admin.
Posted by Äiti at 11:02 No comments: