I took a little me-time this week and went to St Petersburg, Russia. I didn't really have a plan, just wanted to take it easy, eat, walk, write. The weather was warm and bright, so it was a perfect short break.

I was half-planning on going to the Russian Art Museum, but stumbled across a sign for the Anna Akhmatova Museum at Fountain House and decided to go there instead. It's set in the apartments that Akhmatova lived for almost 30 years with her son at times and her lover the art historian Nikolai Punin and his family. It's where she wrote some of her 'Poems without a hero' and other poems that so challenged Stalin and his regime that she was forced to hide her work and was a prisoner in the house.

It was a place of such sadness. They've tried to gather photos, furniture, artworks that represent Anna, Punin and the period: Punin's overcoat left behind when he was arrested with Anna's son Lev, a drawing by Modigliani, travelling cases. They've also set up one room as the White Hall which is taken from 'Poems without a hero', featuring her poems and pages of handwritten texts. It felt so weighted with loss, every item connected with someone who carried so much grief around with them daily.

No one wants to help us


Because we stayed home,


Because, loving our city
And not winged freedom,
We preserved for ourselves
Its palaces, its fire and water.


The museum has an audio guide in English, but in the White Hall room the poems were all in Russian, which added to my feeling of disconnection, but it also made me want to read her work again. 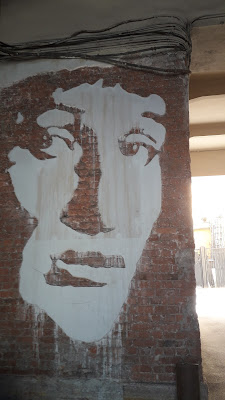 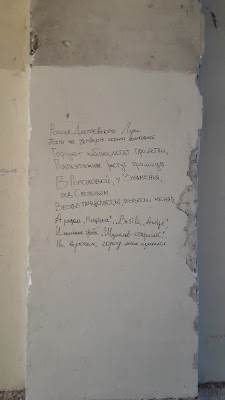 Visitors scribble their favourite lines or dedications to the poet on the walls in the garden. 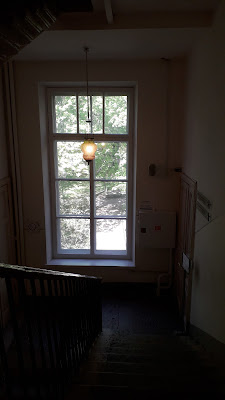 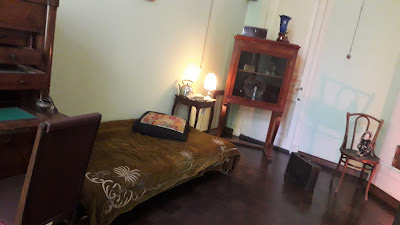 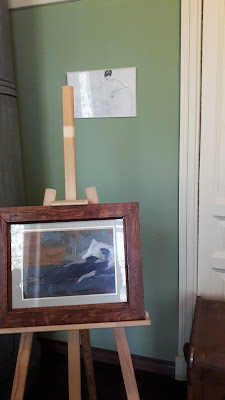 I've always loved Akhmatova's work, but haven't looked at much in ages, so I've ordered her poems and some biographies from the library. The visit was sad and brought a lot of things I'm dealing with to the surface, but it was cathartic and eye-opening. Definitely worth the detour.
Posted by Äiti at 22:45