One of the issues living in a non-English speaking country as an avid reader is getting the books I want to read. I can order books, especially from the big evil online bookseller which I desperately try to avoid, but sometimes getting specific books from smaller presses is difficult. And I miss the kid in a candy store moment of having a whole shop of English books to choose from.

So when I started organising my trip to Scotland last month, one of the first things I did was check out the possibilities of finding English language bookshops near my route. As I was going to the far north, there were only two small shops, no big chains, so I thought I'd better order in what I wanted in advance.

The Ullapool Bookshop was nice enough to find almost all the books on my list, though some weren't available in time for my trip. I was going to pick them up on the way home but forgot to pack the book I was reading before I left, so I stopped in before I caught the ferry to Lewis. So I got the pleasure of dipping into the hoard during my trip.

One of my goals was to write short reviews here of the books as I read them. My selection mostly includes Scottish writers with some poets. 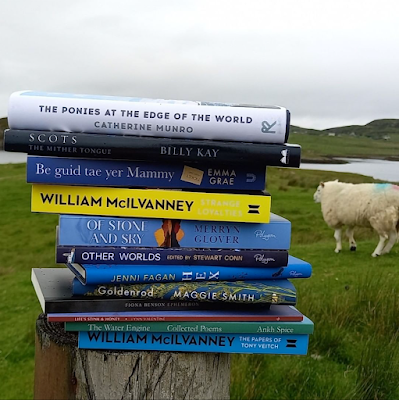 The first book I dived into on the trip was William McIlvanney's The Papers of Tony Vetch - all his books mentioned are available here. Author Ian Rankin's collaboration to finish McIlvanney's last Laidlaw novel was released last year and it took me a while to get a copy. I read The Dark Remains and was intrigued to find out how much was Rankin and how much was McIlvanney, how much of Rebus was inspired by Laidlaw.
I bought Laidlaw earlier in the year and was blown away, especially by the character's take on Glasgow, a city where I lived for over a decade. I have to admit I'm hooked. The detective stories are just vehicles for the character's musings on the world, for the rich prose, but they carry them well while keeping the reader engaged with the plot. All three of McIlvanney's books are amazing for playing with language and imagery, but the last one, Strange Loyalties, the only story told in first person from the point of view of the disheartened detective is raw and powerful. I actually dragged it out, so I could enjoy it for longer. I cannot praise these books enough and Canongate have rereleased his other books, so I have a few tucked in my Christmas wish list.
I studied Scottish Literature back in the day and one of my interests was literature in the Scots language. I can read Scots, but I cannot speak it and sound natural. My own accent always overpowers. Emma Grae is a promoter of the language on Twitter and this was how I came across her novel in Scots novel Be guid tae yer Mammy.

Reading the novel is like having my friends and family and especially my mother-in-law Jeanie talking in my head. Grae captures the language and the place, a west-Scotland small town, so well. The plot of the novel was unexpected, a family drama that was neither twee, saccharine nostalgia nor dour Scottish misery. It felt balanced with characters that I cared about and a realistic ending.
The Scots flowed well and I was quickly caught up in it and the story. It wasn't just used for dialogue which is often how Scots authors balance using the language with allowing non-Scots to read it, but gave the book part of its personality. I don't think non-Scots speakers would take long to find their way into the novel, as it wasn't forcing old words into new mouths, but reflecting how it's used every day. As an advocate of Scottish literature and Scots, I'm overjoyed to see the language making its way into more and more books. Emma Grae is already set to bring out her second book in Scots in the near future, so something to look forward to.
I've started my next book, so will hopefully be able to review it soon. Photos from my stay in Ravenspoint Hostel in Kershader, Isle of Lewis.
Posted by Äiti at 09:54