I spent the weekend with my writing group at a Writers Retreat. We booked a big events cottage in Eastern Finland and drove up on Friday after school. It was amazing that we managed to get 11 people together after such a difficult 18 months. We spent time sharing our work, talking about various writing issues and some time writing, but most of all we spent time laughing and sharing. It was very much needed. 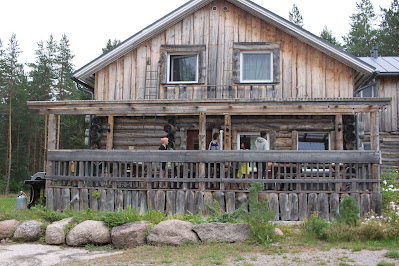 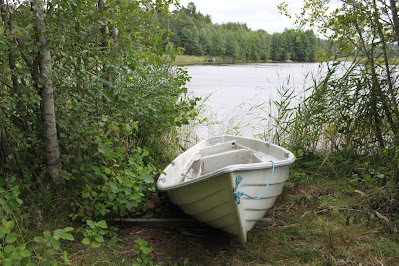 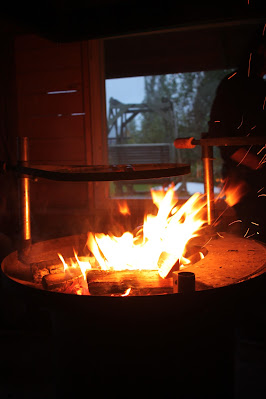 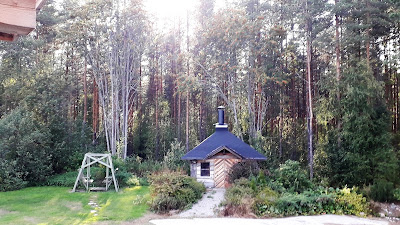 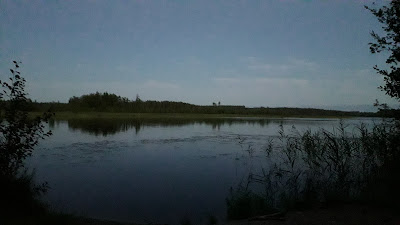 I didn't do any reading over the trip, but I'm back on the horse with #The Sealey Challenge: Day 9: Glimt av opphav - Glims o Origin by Christine De Luca, , a Shetland poet. Christine's poems are in the Shetland dialect of Scots and then translated to Norwegian by Odd Goksøyr. Christine gave me this collection when she visited Helsinki a few years back promoting a project because I speak some Norwegian and have studied the Scots language in university. I really enjoyed reading these poems out loud, in Norwegian and Shetlandic, seeing how the languages are so closely connected. Her poems examine the overlapping of the two cultures as in 'Thule Revisted'/'Tilbake to Thule' where Norwegian sailors arrive in Shetland to the delight of the locals as well as various characters, places and cultural highlights of the islands. The poems range from their geological beginnings to modern day, even beyond Shetland.

I love that Christine doesn't shy away from mixing science and it's language with that of history and old myths, bringing Shetland into the modern age with a generous nod to its origins, hence the title. The poems are rich, linguistically, images and sounds evoking the place, the people and their stories. Beautifully crafted.

Day 10: Richard Hugo, The Right Madness on Skye. I read this book decades ago and brought it out of my loft a few years back, but hadn't gotten around until now to reread it. Not quite fitting the idea of buying new books, but I can't afford that many books just now.

Richard Hugo has an amazing sense of place, I loved his book on writing The Triggering Town which focuses more on his method and connection to location in his poems. This collection wraps his poems around the spirit of the Isle of Skye, connecting with the living and dead inhabitants, so spending time on the island in Scotland allowed him to do just that on many different levels.

He explores Skye's history, mythology, geography, the despair still felt after the Clearances, the love of Gaelic and mysterious Celts. The image of a strange woman often pops up on the periphery of his stories, looking on in warning like Cassandra, knowing too much, but never listened to.

His poems often feel rambling, like he's chasing their ideas through the landscape until he can get to grip with them. But then he's sharing their truths with you over a whiskey. Hugo was one of my favourite poets when I was in university out in the Pacific Northwest where he was originally based and I now remember why. His honesty over his struggles and fears with his writing, his life and life in general feel so sincere and at times heartbreaking. This was a lovely reread.

Since school has started back with a rough bang, I'm turning to my collection of chapbooks I've received as part of Hedgehog Poetry Press's Cult of the Spiny Hog I joined a couple of years back. For a yearly fee you receive copies of all the books the Press publishes, and also free entry to any competition.

Day 12: Before it's too late by Sarah P Thomson. I'm tired with my first week back at work, so I'm going for a shorter chapbook published by @hedgehogpoetry.

I've always said I'm not a great fan of poems that work with strict forms, but I found the way the poems in this chapbook use repeated lines in villanelles and pantoums and other forms really mesmerising. How the same line repeated two or three times changes the meaning of that particular line,but also the lines around it, giving them more weight or reversing their intention entirely. Thomson's poems tempt me to want to try more of these styles, to create such elaborate layers. She touches on many subjects, but the title links them all together beautifully.

Day 14: Taxus Baccata by Patricia M Osborne. Another Hedgehog chapbook that I received as part of their Cult subscription. It's worth joining. Taxus Baccata is a collection of nature poems focusing especially on birds and trees. Osbourne examines disparate beauty and savagery of birds, magpies cannibalising a flock-mate, a swan mother and the decline of ancient trees. She mixes mythology with slow, detailed descriptions of yews, oaks, swans and seagulls. Her rich language drips with colours, textures and movement. This book is a delightful read.

In other news, I have had a poem published in Stand Magazine. I recently came across an old notebook where I kept track of my early submissions and according to that I first submitted in Stand in 1996. It's taken me all this time to have some work accepted, but I'm overjoyed it's happened and with my poem 'The Perfume of Rain' which I particularly love. So a proper dream publication.