Autumn has hit Finland hard. I love it in the now, but it's always the upcoming season that dampens my enthusiasm for windfall apples and cool mornings. However, we're glutting on crumble, spices, the changing colours while we have a chance.

Yesterday, I recorded a new autumn poem with my writers group, Helsinki Writers this weekend as part of a Superwood Festival project a local university has organised. It's one of a series of poems my group is providing as audio for a forest walk. I was nervous about professionally recording. It's almost ok in my quiet house with no one watching, but reading in front of my friends and a handful of students was a bit nerve-wracking. But it's a well-paid gig, so I jumped at the chance. It was a lot of fun to work with the other writers and come up with separate poems on a similar theme that worked with each other. I'm excited to hear the final project. 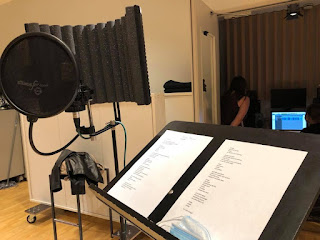 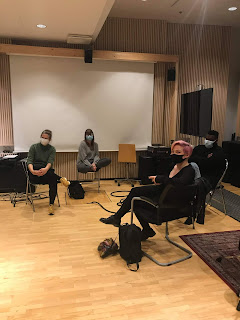 Even though it was a bit strange to hear my voice played back to me, they made it sound pretty good, even in the raw form. And the experience wasn't that scary. My poem was one of the longer ones, but I managed to get through it twice and had one small mistake early on for each of those versions, so it wasn't too bad. They managed to take one line out of one version that was said with better emphasis and put it in the other take which was better overall. So I'm happy with my end.

It was interesting to write a poem that I knew would primarily exist in audio form, to think about what I could say easily and what could be understood from sound alone rather than the words on the page. I made a lot of changes once I started to practice reading it aloud, words and phrases that became tongue-twisters next to each other, images that would be lost unless given space to breathe. Hopefully, it will work, but it's hard to know until hear the poems next to each other, cleaned up.

My writing group is brilliant, we've been sharing our drafts, conferring on proofs, offering advice, working out running order. We're all from different backgrounds, so we had one person with more experience in performance, myself and another writer have a bit of experience in reading work (though I'm not good or comfortable with it) and some complete beginners, but we all managed to do a great job and have fun. I've been talking for ages about having a workshop on reading your work, so hopefully this will happen so we can take advantage of more chances like this. I'll hopefully be able to link to the recording once the event is over.

Other positive notes, one of my poems is appearing in the new edition of the The North magazine. The North is one of those established magazines I've been trying for years to get into, so I was chuffed when they accepted one of my recent poems. There are so many established and new names to check out in each issue, I can't wait to dip in.

I'm equally pleased to appear in a newer magazines like issue 2 of the new Glasgow-based magazine Wet Grain. Smaller magazines offer less well-established writers a chance to shine, so I never rule them out. I like being involved at the beginning of what may turn out to be a big name later on and to follow writers from early stages in their career, but I've been around long enough to do that. lol.

I've also had a poem published in the university-themed anthology The Worst Best Years published by Acid Bath Publishing. Fun to remember those distant times, good and bad though it's somewhat a relief that they are over and I can write about them without the stress of living them.

I'm excited to see what else this season brings. Enjoy September in its colourful glory.